When love and skill work together, expect a masterpiece.
- John Ruskin

These days, Pat & Gina Neely are best known for their double presence on the Food Network ("Down Home with the Neely's" & "Road Tasted with the Neely's") - but to those of us who hail from Memphis and/or Nashville, we know them for much much more. 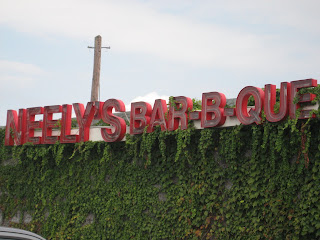 Neely's Bar-b-que began in 1988 in Downtown Memphis, launched by four brothers with a penchant for hard work and a passion for barbeque. Within four years, they expanded their business and opened a second location in East Memphis. They entered the Music City food scene in 2001, and the rest is history.

We have pretty much found ourselves ordering the same dishes every time we go, and this most recent trip was no exception. 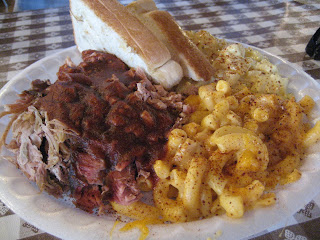 The large chopped pork plate holds enough barbeque for a hearty lunch or dinner, as well as leftovers to be enjoyed later. The pork is tender, with a robust smoky flavor and the slightest hint of tangy vinegar. It comes smothered in their famous sauce, which is a classic combination of sweet and hot, accompanied by thick texas toast and choice of two sides. We decided to carb-load on the sides, and opted for potato salad and macaroni & cheese. Their potato salad is divine, with perfectly cooked potatoes and a creamy mustard-based sauce. The macaroni & cheese is exactly how it should be in the South - creamy, cheesy, and rich. 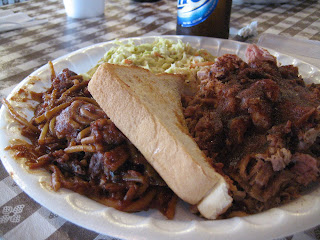 We also had the chopped pork plate with cole slaw and barbeque spaghetti. I am very particular about cole slaw, and Neely's hits the mark - cabbage that is crunchy and not soggy, dressing abundant without being sloppy. I've spoken before about my love of barbeque spaghetti - and this is the driving force behind it. Perfectly cooked pasta, tossed with tender barbeque and drenched in that heavenly sauce. 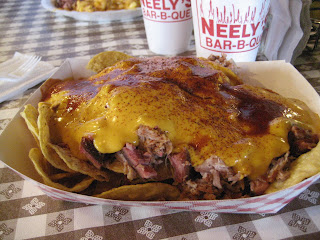 I've saved the best for last. I am a woman obsessed with nachos. I have been since I was a child, and that was the snack I requested every single day when I got home from school. These nachos aren't anything fancy, simply pulled pork, barbeque sauce, and cheese sauce heaped atop salty tortilla chips and finished off with a sprinkling of their signature barbeque seasoning- but they are comforting, full of flavor, messy, and delicious.

Beyond the dishes above, the menu is full of other amazing items, such as smoked sausages, turkey, ribs, wings, and true Southern desserts (think Pecan Pie & Peach Cobbler). The next time you find yourself craving true barbeque, look no further than Neely's. (Aside from the 3 locations, they have a presence at FedEx Forum in Memphis and Gaylord Entertainment Center in Nashville - and they offer the option to order sauces and seasonings online.)

I love nachos - and that plate of them looks like it came straight from heaven. Fantastic!

It all looks so good! I love to watch the Neelys!