The Days of our Lives

Ponder well on this point: the pleasant hours of our life are all connected by a more or less tangible link, with some memory of the table.
- Charles Pierre Monselet 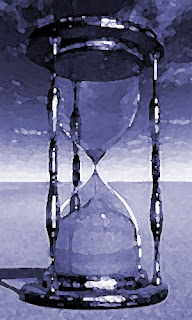 We all have them - the days that we count as significant and meaningful, that we celebrate year after year. The most obvious of these are birthdays and anniversaries, but there are others that can be included in the history of who we are.

August 25th, 2005 is the day I'll always remember as the first time I saw the man that would become my husband, while October 27th of the same year holds a place as the first time we had a conversation and I realized he was the one.

By January of 2006, we were all but living together - and we signed the papers on the purchase of our first home six months later, on June 30th.

Almost a year later, on June 6, he asked me to be his wife - and on September 29th, 2007, we stood before friends and family to say our vows and begin our lives as a married couple.

Now, we have a new date to add to the list.

I met my husband online of all places! We talked on the phone for a week, met in person 7 days after our first email, moved in together 6 weeks after that, and married 6 months after we met!

You have lots to look forward to!!!!

Oh Hon!!! I have TEARS!!! Congratulations!! And I like the story. You knew...and here were are! A baby!! That is just so exciting!! I wish you minimal to NO morning sickness and lots of healthy recipes that will give you two vitamins but satisfy those notorious cravings.

Although I wouldn't look down on you for a weekly fried dill pickle binge at Sportsmans either:)

uh wha wha?! you're preeeegnant?! i think your next post should be about the healing powers of the saltine cracker. can't wait to meet littlest j's cousin!

You just gave me chills. Congratulations. There is nothing more wonderful than becoming a mother.

yeaaaaaaaa! Congratulations! that is so exciting. babies are just amazing creatures. I am so looking forward to having children.

What a sweet post!! Congratulations, I am so happy for you.

i have goosebumps, and i'm not kidding. this is a fantastically-written post, and many congratulations on your new addition! :)