No man in the world has more courage than the man who can stop after eating one peanut.
- Channing Pollock 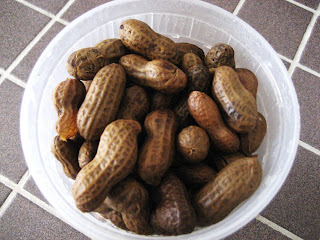 When I was little, we'd take annual family vacations to the beach - usually Southern Florida, where my dad had family. This meant long drives through desolate highways in Georgia, past numerous produce stands with hand-painted signs hawking fresh peaches, ripe tomatoes, and hot boiled peanuts.

My dad got me hooked on boiled peanuts at a very early age. They are an aquired taste, and from what I've learned, you either love them or hate them. Loving peanuts is not even a requirement, as they taste more like salty beans. Peanut boils date back to the early 19th century, when they were done as a social gathering. They were also known then as "goober peas", as it was typically the unsold and surplus peanuts that were used for boiling.

A few weeks ago, I was craving peanuts (these pregnancy cravings know no bounds) and so my husband went to the store to grab a bag. He came home with a sheepish look on his face, and timidly held out a bag of unsalted peanuts with the apology that it was the only thing the store had in stock. While my reaction at the time was a bit dramatic (think tears and a weak attempt to reassure him it was fiiiiiine, I can SO totally eat these - followed by a vehement refusal to do so once I tried one), I decided to stop staring at them in our pantry and do something with them.

I soaked the peanuts overnight in a Dutch oven, then drained and rinsed them the following morning. I then added fresh water to the pan (enough to cover them), 1/2 cup of salt and a tablespoon or so of Cajun seasoning, and brought them to a boil. Once they began boiling, I reduced the heat to medium low and let them simmer for about 6 hours. We ended up with tender peanuts, salty and spicy - the perfect solution to a near disaster.