An Apple a Day

Did perpetual happiness in the Garden of Eden maybe get so boring that eating the apple was justified?
- Chuck Palahniuk 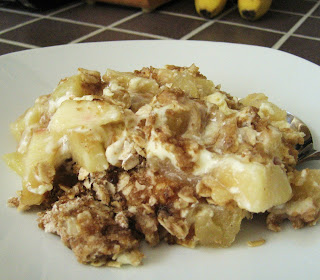 I found this recipe for an apple cheese crisp, and even though it was listed as a dessert recipe, I decided to make it for breakfast instead. The verdict? Eh. It would be better if it were baked (this recipe called for microwave preparation, which I didn't realize at the time) but I don't know that I liked it enough to try it again differently. I will say the flavors were good, and the apples were tender. The topping wasn't nearly crunchy enough, but the filling was creamy and sweet. At any rate, it wasn't a bad way to spend a drab Saturday morning.

- In a 2 qt. microwave-safe dish, toss the first six ingredients. Microwave uncovered for 8 minutes, stirring once halfway through.
- In a mixing bowl, beat cream cheese and sugar, then add egg, flour & milk, mix well and spread evenly over apples.
- In another bowl, combine oats, flour, brown sugar and cinnamon. Add butter and mix until crumbly. Sprinkle over filling and microwave, uncovered, for 6 minutes or until apples are tender.