If Loving You is Wrong, I Don't Wanna be Right


Well, if you put it that way, I think you’ve got a point. Have another biscuit, sorry.
- Eddie Izzard 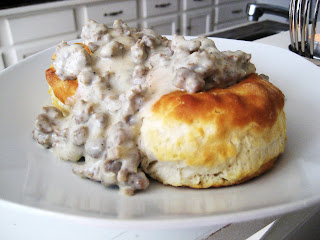 I hate to admit it when I'm wrong. The defiance I experience when I realize I've misspoken, or argued a point to death - only to realize I won't win the debate - presents itself in a very stubborn, pouty-mouthed apology and the admission that maybe I am mistaken.

When I was younger, my parents dealt with my ability to stand firm when I believed in something, even it were blatantly obvious to be false. They coined me "the little lawyer" and swore I'd have a career in the courtroom. One of my long-standing nicknames is "sassafras", due to my tendency to toss attitude in the general direction of anyone on the other side of the fence.

When I'm faced with the realization that I am incorrect, I have to dig deep to find the ability to step down and confess defeat. I employ distraction tactics at rapidfire speed, hoping to deter my opponent and cause forgetfulness of the issue at hand. The most surefire tactic I've found is food.

Knowing each of my husband's favorite foods, I'm prone to stockpiling the ingredients necessary on the chance that I'll be faced with the possibility of a discussion on the downward spiral. I can argue while I cook, so it's a matter of continuing to save face while I prepare one of his guilty pleasures or comfort foods. This method also allows the ability to stall, because he knows better than to interrupt me if I'm mumbling to myself about whether a dish needs salt or contemplating if it needs another three minutes in the oven.

He's like a kid who just met the Tooth Fairy when he sees me pulling out the makings for biscuits and gravy, and I can usually count on turning away from the stove to see him sitting on a barstool at our island, gazing at me adoringly and awaiting what's to come. In an instant, he's given up on trying to prove his case, and he's content that in mere minutes, he'll have a mouthful of delicate biscuits topped with a creamy peppery gravy generously studded with aromatic sausage.

- Add butter and flour to skillet and combine to form a roux, then add milk and stir constantly, scraping up the brown bits from the pan

- Once mixture has thickened, add sausage, salt & pepper to taste, and stir to combine. Serve over warm biscuits (I take the lazy way out and make White Lily frozen biscuits - they are incredibly good.)

I absolutely love your quotes on every post. Particularly since I know the origin of this one...makes it even funnier.

And biscuits and gravy...makes me a little homesick but I bet I could show boyfriend an upside to dating a southern girl when next he's home...I haven't cooked downhome for him yet and, well, YUM!!!

Hmm, biscuits and gravy would certainly help me win any arguments with my husband. It's definitely his favorite guilty pleasure. You're a smart lady :) Thanks for the great post & recipe!

yum. that's just about all there is to it. biscuits and gravy (specifically chipped beef gravy) is probably my all-time favorite comfort food. more gravy, please. :)

Love your writing! It's as delicious as the food.

I don't wanna be right either, if we're talking biscuits and gravy!

My husband is from Georgia and I have never attempted biscuits and gravy. He loves them though, so I might be brave enough to try your recipe. Thanks for checking out my blog!