That's the way that the world goes 'round. You're up one day and the next you're down.
- John Prine 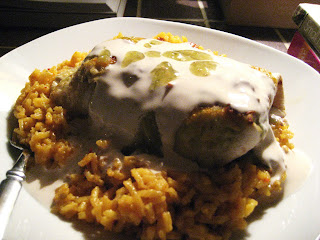 We love John Prine. It's the first conversation we ever had, when I noticed a Prine poster in my now-husband's office, and used it as an opportunity to strike up a conversation with him. I had just started working at the ad agency where he also worked, and I'd been trying to figure out a way to approach him. Our first dance at our wedding was "In Spite of Ourselves", which is not a very traditional first dance song - but it was very fitting. One of my favorite Prine songs is "That's the Way That the World Goes Round" - the chorus is as follows:

I was at a Prine show once and a woman kept screaming "Play the 'Happy Enchilada' song!!" - turns out, she thought "half an inch of water" was "happy enchilada"...

I think of that every time I make enchiladas - so I call these "Happy Enchiladas". Loaded with chicken, cheese, green chiles, and green onions, they will undoubtedly make you smile.

- Heat oil in large skillet and saute chicken tenders until cooked throughout, remove from skillet and set aside

- Add flour to oil in skillet and stir until thickened, then add next 4 ingredients, stirring until fully combined.

- Chop or shred cooked chicken and add to cheese mixture

- Spoon mixture into tortillas and fold to form a pocket, then place seam-side down in a glass baking dish. Bake for 12-14 minutes, then spoon salsa over each, top with shredded cheese, and bake until cheese melts, about 3-4 more minutes.

- Remove from oven and drizzle Mexican crema over each, and serve on top of Mexican rice (I use Vigo)

We were satisfied after our meal, but in the mood for something sweet. We opted for a quick and easy version of sopapillas. 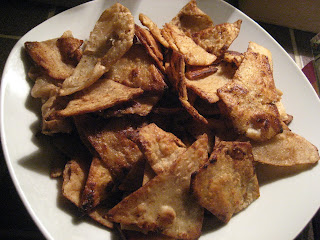 A sopapilla is a traditional Mexican dessert - and although it is prepared many ways depending on the region in which it's served, the basis is fried dough, usually drizzled with honey or syrup and sprinkled with cinnamon and sugar. For these "sopapilla chips", I cut up tortillas into triangles, fried them in a mixture of butter and oil, and tossed them in cinnamon & sugar.

Enchiladas make me happy but these would make me VERY happy. I bet your house smelled amazing while they baked.

Cute story. I love enchiladas and despite my inability to photograph them, yours look delicious!

Okay, I see in your profile you say you're good at rambling. I think we need to have a ramble-off and settle this one, because no one's soap box is bigger than mine! You let me know when and where!

I love this recipe for enchiladas, it is totally different to how I do them, but sounds like it could even be better than mine!

p.s. I've added you to my blogroll.