If God had intended us to follow recipes, He wouldn't have given us grandmothers.
-Linda Henley

Our friend Frank has the honor of being the only person we know that shares both of our loves. He can spend hours in our home and conversation sways easily between football and food. He knows who won the 14th Super Bowl and how to make a deep dish pizza from scratch. He watches football with intensity, and at halftime makes himself at home in our kitchen to whip up one of his specialties.

As many cooks do, Frank credits his grandmother for much of his inspiration. He has her recipes, knows her tricks, and uses her techniques. For my carnival-themed 30th birthday party, he brought her Rice Krispie Bites - and on his last visit he shared her recipe with me.

Rice Krispie Treats were invented in 1939. The original recipe calls for Rice Krispies, marshmallows, and butter. That classic combination is the most widely known and used, although multiple variations and adaptations have been made throughout the years. Frank's version includes creamy peanut butter, brown sugar and light corn syrup, and the result is rich & comforting, with the classic airy crunch associated with Rice Krispie Treats. 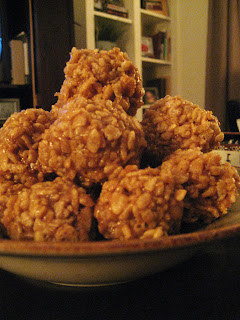 These are the best little tasty treats EVER!! I had the chance to try these out at the 30th Birthday party and let me just say that you CANNOT eat just one!