A Recipe for Disaster


Happy and successful cooking doesn't rely only on know-how; it comes from the heart, makes great demands on the palate and needs enthusiasm and a deep love of food to bring it to life.
- Georges Blanc 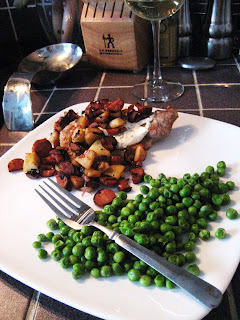 I’m ridiculously bad at following recipes. I love to read cookbooks, study recipes, but as opposed to using them exactly as they appear, I prefer instead to gain an understanding of complementary ingredients, proportions, and methodology. This failure to adhere to the formula results in my being equally bad at translating recipes. I’ve had friends and family ask me to tell them the recipe for a dish they’ve loved…and I give them this blank look and usually mutter something along the lines of “Oh, it’s pretty easy…all you do is…” as my way of attempting to avoid the inevitable questions of “Well, how MUCH salt?” or “But how long do you cook it?”

I cook by taste. I prepare meals based on an innate sense of temperature, cooking lengths, scent, sight, and personal preference. While over the years I’ve established my own routines and basics, I by no means can state that I’ve never had…mistakes. There have been experiments that resulted in turned heads, closed eyes and the inevitable stories to follow years later...when someone thinks that enough time has passed to laugh about the time I tried to make a certain dish and failed miserably. Don’t even get me started…

All of this is to say that when I run through a recipe here, I am sometimes horrible at explaining. When I describe the steps I take, I somehow do so on the assumption that you’ve taken residence in my brain, my kitchen, and my skillet. It’s not for a lack of trying…it’s not my laziness taking over my keyboard. It’s my inability to accurately describe and lay things out as seen in every cookbook I’ve ever read. Oh, and my incredible lack of patience may have just a tad bit to do with it as well…

- Heat olive oil and butter in a large skillet over medium high heat. Sprinkle both sides of each pork chop liberally with salt and pepper. Once butter and olive oil have melted, add pork chops and cook 2-3 minutes on each side, or until golden brown. Remove from heat and keep warm.

- Spread herb cheese mixture evenly over each pork chop. Top with apple and onion mixture and then wrap each pork chop in bacon slice, securing with a toothpick.

- Place pork chops in baking dish and cook in oven until bacon is crisp, approximately 12-14 minutes.

You are the bacon fan par excellence. No less than three bacon recipes on the main page alone.

I agree re: cooking by taste, but you already know that.