There is a charm about the forbidden that makes it unspeakably desirable.
- Mark Twain 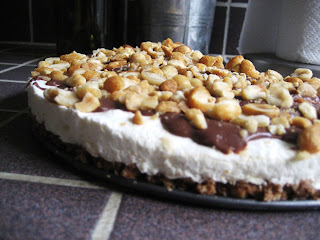 This is the time of year when diets are all the rage…when everywhere I go, everywhere I turn, I listen to friends, family, old coworkers, and strangers discussing their resolution to eat better. If I took the time to write it all down, only to go back to those same people 2 months from now, the number of people who fell off the diet wagon would surely be astonishing.

It dawns on me every so often that I’ve taken things above and beyond…that I’ve eaten lunch out every day in a week, that I haven’t been to the grocery store in two weeks to buy fresh produce, that my dinner last night consisted of cashews and wine. When that happens, I turn it back a notch. I get a grip, put things in perspective, and slow down. It seems like an unhealthy cycle, but I appease myself by saying that it’s no crash diet, no harsh criticism, and no worries.
As I get older, I realize it won’t always be this easy. My metabolism is slowing, and the pounds will get more stubborn with age. I balance that with the knowledge that as I get older, I’ll get smarter. I’ll take notice of the increasing frequency of heartburn and sour bellies that I induce on myself by eating poorly….I’ll speak to myself with a voice louder and more insistent than the one I use now.

The fact that I'm rapidly gaining weight due to this ever-growing baby makes the food fight within me all the more frustrating. Every bit of food that passes my lips is met with guilt - less so when I'm following a nutrient-rich regimen for the benefit of the baby, more so when I'm indulging the new sweet tooth I've acquired since I became pregnant. It's easy to worry about how I'll take the weight off, and easy to get upset with myself for putting on too much weight as a result of poor willpower.

But for the time being, I’ll enjoy it. And if that means sitting down to this cheesecake inspired by one of my favorite desserts, Nutty Buddy ice cream cones, so be it.

- Preheat oven to 350 degrees.
- Combine crushed sugar cones and butter until just moistened and fully mixed. Spread mixture in bottom of greased springform pan and bake 5-7 minutes, or until crust is browned.
- Meanwhile, beat cream cheese, Cool Whip, and sugar in medium bowl until light and fluffy.
- Once crust has completely cooled, spread cream cheese mixture on top of crust. Drizzle with melted chocolate and chopped peanuts and freeze until firm (25 minutes).

Wow, that sounds great! I'll definitely have to try that one for the next event, otherwise I might sit down and eat the whole thing myself!