Sex is good, but not as good as fresh sweet corn.
- Garrison Keillor


People often speak of the difference between love and lust. I easily equate the concept of love and lust to food – in terms of impetuous cravings vs. foods that will always appeal to me as enjoyable. Lust strikes quick, and often ends badly…which holds true for me when it comes to a craving I just can’t pass up. When I get a craving for something, it’s usually unhealthy (although decadent and delicious), and while I enjoy it in the present tense, I’m usually left with a combined feeling of guilt and unease once I’ve consumed it. Love, on the other hand, sustains and satisfies long after you begin to enjoy it…and the feeling it leaves behind in our soul is one of comfort, warmth, and true bliss – much like a go-to meal does once it’s been enjoyed.

Lust is deceptive in its appeal – rarely do we consciously forego the opportunity to engage in something so presumably amazing. Should we take the time to stop and think about the consequences of being led down that path, we’d more likely than not pass – whether we’re passing up on an empty night of passion, or an empty plate of calories. The result is the same – a sickening feeling that something is missing, and the euphoria has ended almost as quickly as it has begun.

Love builds slowly, and if we’re lucky, it propels us to a state of innate and constant appreciation and awe of what we’ve found. It doesn’t disappear, even if it disappoints, and it can be relied on, even in the most uncertain of times. To me, a favorite dish instills the same sense of comfort. Finding a food or a meal to fall in love with is second only to finding the person you want to spend eternity with.

- Remove husks and silks from corn, cut corn from cobs.
- In medium skillet, melt butter and add corn, stirring to coat.
- Add chicken broth and bring to a boil, stirring occasionally.
- Add half & half and next 4 ingredients, and reduce heat. Simmer until thick and creamy, stirring occasionally, about 20-25 minutes. 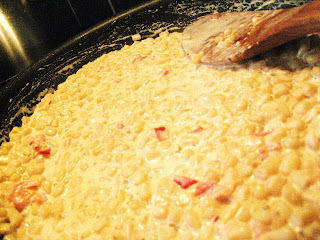 lovin' the quote thing
the recipe is wonderful...

i need to make this but if the corn is great i just eat it off the cob raw...